Reversal of Destiny: God's Faithfulness to the Knowlton's 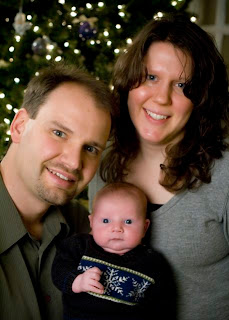 Christmas 2008, Shrade is 4 weeks old
On Thursday, my last Bible study on Esther, we had a sharing session.  I didn't think anything of it and was not planning to share at all.  But as I got to thinking about the amazing story of Esther and what I had learned through it, God prompted me to share my "Reversal of Destiny" story.  So here it is... (This may not be new to some):

In April 2006, my husband had a back injury that put him out of work for 2 years.  We had been married almost 2 years and in that time he had been looking for a full time job that would allow me to stay home when we had children.  I was currently working as a Kindergarten teacher at Cascade Christian School.  After Jeremy's injury, he was unable to work and stayed home for a year taking care of his back.  During this time we started getting compensation from L&I.  It wasn't much, but enough.  We kept praying and praying for his back to heal.  In June 2007, Jeremy started a work retraining program at Clover Park Technical College for Environmental Science.  He was an awesome student.  Halfway through the program he started again to look for work.  His back was better- PTL!  He still has to be careful, but he felt he could find a job with his limitations.  He had several interviews, but God wasn't ready to give him a job.  In March 2008 we found out that we were pregnant.  A flood of fears entered my heart as I thought, "If my husband does not have a job, I will have to leave my baby in daycare and work."  We always wanted for me stay home if we had children.  I really relied on Psalm 121:1-2 "I lift my eyes toward the hills- where does my help come from?  My help comes from the Lord, the Maker of heaven and earth." Meanwhile, the compensation that we were receiving from L&I would come to an end in June 2008 when Jeremy finished school (which by the way, was paid for through the worker retraining- PTL!).  Jeremy continued to pursue job leads.  We focused on God and the plans he had for us.  We trusted Him to help us through our seemingly declining circumstances.  One afternoon, Jeremy was waiting to hear back about a job he had interviewed for.  The phone call came and he was hired by McFarland Cascade Lumber Co.  THAT SAME DAY we received our last check from L&I.  The LORD IS GOOD!  I was let out of my contract with Cascade, and we had our beautiful baby boy on THANKSGIVING!!!  Not only that, in our declining economy, Jeremy was recently given a 10% raise, a potential for bonuses and 2 days off a week.  I cannot believe the way God "reversed our destiny."  I am now at home with our precious baby boy.  I remarked to Jeremy last night that it feels strange not to get paid for doing a job anymore.  He told me that I am making an investment by being home with our son. So, the Lord can reverse your destiny, He did for us.


I'm hooking this post up to A Creation of Miracles by Tara.
Posted by Shonda at 1:04 PM

Thanks, Shonda, for sharing your story of God's faithfulness! God is "never early, never late" always "right on time". Thanks for the encouragement to keep trusting Him to be faithful ... I too need to lift my eyes toward the hills! God Bless you as you nurture your boy (and future babes) and your husband!

That is beautiful as is your faith. You have a wonderful family.

I do have a question to ask you about Ruth. I have noticed, as I have traveled through blogs that there are several groups who have studied Ruth in the past six months. Is it particularly popular now and if so, is there a reason?

This is very inspiring!