Last year I thought I started off on the right foot but I was too overwhelmed and not very organized.  I was using something that wasn't working for me.  I started researching again and found something that was fun to put together and helped me feel more organized than I have felt in years.  Here's a little video of my Home Management Binder: ﻿


If you want to "copy" my idea, go right ahead.  It's not really my idea, but I added a lot of stuff that is "me."  Here are the links to the posts that contain all the printables that I have put in my binder.  Enjoy!


Links:
*Organizing Home Life- a tutorial on the blog showed how to make a notebook
*52 Weeks to an Organized Home Challenge- Home Storage Solutions 101
*Clean Mama
*Carey Bailey- Choices
*List PlanIt
*Blog Planner
*52 Week Money Challenge- I use Home Storage Solutions printable and put in dates that I will transfer money to another account I have created in my bank account.
*31 Handmade days budget book
*Special Days Planner
*Take Control Organizing
*Other- 31 Days of Living Well and Spending Less No Spending Challenge

Other:
*House Cleaning Lists
*Pulling Yourself Together- Clean Mama (I don't see it available at the moment)
*8 weeks to a less cluttered home- Keeper of the Home
*I Used to be so Organized- The Confident Mom 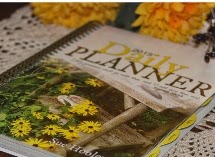 I also use this Daily Planner from Homemaker's Friend.  This is my first time using it and I saw it recommended by Club 31 Woman and Christin Slade.

And I'm still using the Mind Organization for Moms Program that I started in May 2014.

All of these combined is making for my year to start off much more smoothly and keep organized.  I hope you can find some things that will work for you!

Posted by Shonda at 7:48 PM No comments:

Email ThisBlogThis!Share to TwitterShare to FacebookShare to Pinterest
Labels: Making Your Home a Haven

by Kathi Lipp is a unique look at the reasons behind clutter that is in your home. There are 4 parts to the book.  First, uncovering the costs of clutter helps the reader understand why your home is cluttered and the joy of living small with freedom.  "Quite simply, every piece of clutter I give away gets me closer to the life I am designed to live.  One of peace.  One of freedom." (p. 35)  In part two, why we buy stuff, Kathi shares how feelings of fear, shame and guilt burden us and cause us to make those poor decisions over and over, yet she gives some practical solutions to help you shift your thinking so you can make better choices for the future.  The largest section of the book is part three, why we keep our stuff.  Kathi gets deep down to the root of why stuff is still in our homes and guides the reader to think critically about this big problem that haunts us wherever we look in our homes.  Here are some of the common excuses: but someone gave it to me, I need this "just in case," I'll put it here for now, and but I spent so much money on it.  These truly bog us down, but the solution comes in part four where Kathi gives a doable plan in a practical way to get rid of our stuff!

This book is one of the best books that has helped me actually get rid of stuff that has been lurking in my home for years!  Kathi gives some very humorous, but true examples of how clutter can overtake your life.  She asks great questions and really got me thinking about why I keep decluttering the same things over and over.  I expected to have a step by step process as I've seen in other books about how to declutter each room, but Kathi gave me so many more tools that has helped me give up things that I've been hanging on to for emotional and psychological reasons.  I feel like I have been drowning in clutter and the past few weeks I've taken out bags of garbage that I keep for "just in case."  I've recycled so much paper and packed up several boxes for Goodwill.  And I feel great!!  The heart behind her book is not just to get rid of clutter, but to enjoy what you already have.  I just made a list of what is most important to me and clutter is not on there.  I'm ready to strip this house and make it a place of peace and freedom.  How about you?

*I was given a complimentary copy of this book for review.  All opinions are my own.*
Posted by Shonda at 6:48 AM 2 comments:

Under the Silk Hibiscus by Alice J. Wisler Book Review

﻿
Under the Silk Hibiscus (Historical Fiction)

by Alice J. Wisler is novel set at the start of WWII after Japan attacked Pearl Harbor and all Japanese-Americans were  relocated to internment camps for the duration of the war.  Heart Mountain, Wyoming is where Nathan and his family are sent to from California.  The father was taken away to a different camp and was only able to send a few letters to his family.  Nathan Mori was the middle son, a teenager,  who was devoted to his pregnant mother, protected his younger brother, battled back and forth with his testy aunt Kazuko and wondered why his older brother could charm all the girls.  But Nathan was the most responsible and when his mother died after delivering her daughter, Nathan felt that he was the one who should care for the family in the absence of his father.  The prized heirloom, a watch hidden in the silk hibiscus in his mother's suitcase, is stolen and Nathan is distraught.  He goes to great lengths to find it and get it back which lands him in the interment camp prison.  Nathan wants truth and justice and instead he is fighting to stay alive and protect his family. His one bright hope is Lucy who has the voice of an angel, but she leaves camp without a goodbye and when Nathan's family returns to San Jose he longs to find her once again.

This story was full of raw and quiet emotion.  It is told from the perspective of teenage boy who longs to be the strong anchor for his family, but continues to be discouraged when he fails in keeping the family heirloom safe.  When his family returns to San Jose and his father comes back nothing is the same.  Nathan works hard to provide for the family and many surprising gifts are given to him along the journey.  This is story of loss, betrayal, hope, freedom and love.  It gives a grim look at the time in history when Japanese-Americans were treated poorly and left with nothing.  Alice writes with heart and gives her characters depth and she also shares a real portrayal of what a family might have experienced at that time.

Visit Alice J. Wisler's blog and read the first chapter in Under the Silk Hibiscus.


*I received a complimentary copy of the pdf of this book for review.  All opinions are my own.*
Posted by Shonda at 9:01 PM 1 comment: