Rumors of War follows a young journalist who refuses to get the "chip" that people in the End Times are embedding in their skin.  She begins to see how all prophecies she has been studying are coming true.  She is on the run but leaves behind a journal that is picked up by an agent for the One World Government  years later who ends up realizing the Truth and joins others who are following the Truth.
This movie was a series of flashbacks between Roxy, the young journalist, and Agent Shaw of the One World Government who finds her journal years later.  The events and characters seem real and scary!  It was a little hard to follow the flashbacks, but it was interesting to see how some of the characters changed their beliefs from the beginning to the end of the movie.
*I was given a complimentary copy of this DVD for the purpose of this review.  All opinions are my own.*

Press Release:
In the post apocalyptic future, Agent Shaw (Ben Davies, Courageous) works for the only surviving government working to bring order to a world full of decay and violence.  Shaw offers little mercy to those that would stand in the way of the government’s edict, that everyone submit to an implanted chip that tracks their movements and purchases.    He is certain that those “zealots” that would put their belief in God ahead of the beliefs of society, could lead the world back on the road toward destruction.   The zealots need to be eliminated.   But his faith was challenged when he found a small book in the rubble near one of the “rebel” encampments- the diary of young college student named Roxy (Jennifer Cooper), who was at the epicentre  of the chip’s creation years before.  She was a young aspiring journalism major whose life took a dark turn when she began researching Mr. Zurn (Eric Roberts, The Dark Knight), the man behind this implanted chip.

Rumors of Wars is a a suspenseful, action packed film that centers around two converging stories- the “last days” of our present and the final days of our future.  Written and Directed by Paul Tomborello, and starring Ben Davies, Jennifer Cooper, and Eric Roberts, the DVD comes to stores November 11th.  For more information or to see the trailer go to rumorsofwarsmovie.com.
*I was given a complimentary copy of this DVD for the purpose of this review.  All opinions are my own.*
Posted by Shonda at 3:04 PM No comments:

When Calls the Heart- Rules of Engagement DVD Review 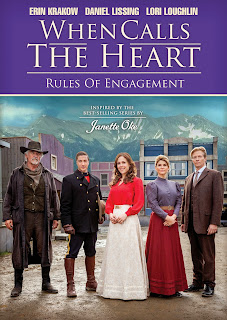 When Calls the Heart: Rules of Engagement DVD is a show stopper with some unexpected twists and turns.  As Jack returns to Coal Valley, he is greeted not only by Elizabeth, but by his former fiancée who arrives via stagecoach and drapes herself on Jack who is taken by surprise.  Elizabeth is dumbfounded and feels awkward and foolish around Jack and Rosemary.    As Jack tries to balance the two women that are in his life, he also continues to investigate the mine explosion.  Bill Avery, a former Mountie,  is hired to come in and make a thorough search of the area to make a case against the owner.  He enlists Abigail's help and they begin a close friendship as well.  Elizabeth is given an opportunity to pursue a more lucrative position, but feels torn for her feelings for Jack and the job that she has come to love.  Things heat up between for Jack as he decides between Rosemary and Elizabeth and the owner of the mine takes bold steps to prevent any further investigation into the explosion.  Who will Jack choose and will the town be able to be settled and move forward with hope from this mine disaster?
I was very intrigued with the new characters that came into this movie.  I felt that Elizabeth handled herself very well despite the charming Miss Rosemary who seemed to have a sharp tongue and prideful demeanor.  Jack seemed to know what his heart was telling him, but couldn't find a way to please both women.  It was also fun to see Abigail enjoy company with a man who also became a hero to her.  This movie had some great moments and a special surprise at the end!   ﻿

*I was given a complimentary copy of this DVD for review.   All opinions are my own.*
Posted by Shonda at 2:46 PM No comments:

Homemaking 201 is the next in the series of DVD's for homemakers from Family Vision Films.  Jennifer Ross and her family have a very welcoming home and a refreshing perspective of motherhood as being a servant of God.  Bible verses, quotes, poems and articles of encouragement are shared throughout the hour of this film.  I love the many ways that Jennifer not only ministers to her family, but also teaches and trains in the process.  She shares many ideas for saving money by making baby wipes, homemade dryer sheets, organizing recipes and creating a homemaking binder.   She sets up many simple resources that allow her day to go smoothly like a hospitality basket, chore chart, homeschool baskets and maintaining home tools like vacuums.  She shares some easy recipes and shows how to properly wear an apron (the "uniform" for a homemaker).  My favorite part was seeing how a focused and unfocused day is like.  I identified in both areas and I know that a mother who is focused pleases the Lord in her daily life.  This DVD gives instruction and vision for a homemaker who seeks to glorify the Lord.   You will be blessed and encouraged to be a more focused and humble homemaker as well as gain some valuable skills and tips for your motherhood journey.


For more information on:
*Homemaking 201
*Joyful Aprons- handmade by Jennifer


Be sure to order this week (by December 5) to get the SALE for the Homemaking 201 and 101 DVD's.  These would make great gifts for a new mother, sister, or friend.﻿

If you enjoyed Homemaking 101 from Jennifer Ross and her family, you are in for a treat.  Homemaking 201 is here! Join Jennifer and her large family as they share more!
In this video we cover:

Click HERE to order!
*I am an affiliate for this company.  Thank you for your support.*