Gratituesday: My car accident 5 years ago

So I know this doesn't sound like a Gratituesday at first, but it WAS!  Five years ago today I was in a car accident that totaled my car (a paid off gift from my precious Aunt Judy who died in 1996).  I was driving somewhere after work one day.  I don't even remember where I was going.  It had just started to rain and the roads were slick.  I was only going 35 mph on a busy road at 4pm.  I was on the phone with my husband telling him about my day at school.  It was the end of the school year and I was busy planning a huge Kindgarten Promotion program.  My mind was not on my driving.  Well, I saw right in front of me a car just stopped.  I yelled "Oh, my God!" and slammed into that car.  You have to know being in a car accident is one of my worst nightmares!  I actually was in 2 already before, but I never wanted another one.  Remember, I was on the phone with my husband.  Well, my airbag came out and burned my arms and hand and my favorite skirt!  My phone flew out of my hand and broke apart.  I was so scared, but I was OK.  Thank you, Jesus!  I was the third car in a three car pile up.  I found a person with a cell phone and tried calling my husband to let him know I was OK.  Later I found out that he was leaving messages on my phone which I still have saved today- "Call me back, honey!"  He was so worried. 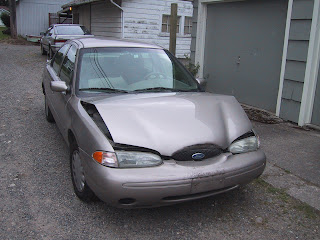 The police came and I got stuck with a ticket for being on my cell phone.  The whole insurance company thing was a nightmare in itself.  Jeremy called a friend who lived close to come pick me up and help me call and get my car towed home.  I was so distraught.  That night I actually went to Home Group and my church friends just surrounded me with love and pampering.  I also had to call my principal and got a sub for my class.  I called my sub who was my Teacher Assistant at the time and I just told her a bunch of stuff to do to keep the kids busy since it was the end of the year.  And thankfully, another friend loaned us their car for a few weeks.

Well, the best thing that came out of this was now we were down to 1 vehicle and we both had jobs.  We had really wanted to get a truck, but we didn't want to part with my car since it was paid off and we liked our other car.  So the car I totaled was out of commission and we felt that was God saying it was OK for us to get a truck!  I really didn't like how that choice was made, but God knew best.  And I didn't sustain any long lasting injuries. 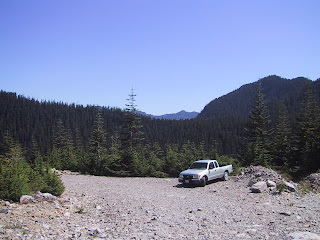 So, here's our truck.  It has been so handy to have for camping or rugged driving and also hauling things around.  We love it and are so thankful for it.

Sorry this was so long, I usually keep things short, but I really wanted to share this story of how God blessed us even in a tragedy.

For more Gratituesday, go to Heavenly Homemakers!
Posted by Shonda at 12:01 AM

Email ThisBlogThis!Share to TwitterShare to FacebookShare to Pinterest
Labels: Gratituesday