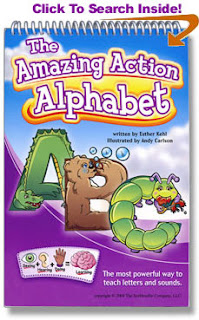 The See Hear Do Company

The child hears an amusing story and learns
the name and sound of the letter
(auditory stimulation).

The child does a fun action with their body
that produces instant recall for the
sound of the letter
(kinesthetic stimulation).

The Amazing Action Alphabet by Esther Kehl is a unique approach to teach young children letters and sounds.  It is called "See, Hear, Do."  First the child sees the picture of an animal in the shape of a letter, then they hear a story which emphasizes the sound of the letter and there is an action to go along with the story and sound.  And the sound is repeated several times throughout the story.  The flip book has a picture side facing the child and the story for the parent to read is on the other side.  There is also a snazzy CD which coordinates with the flip chart.  All the stories are sung and the sounds are practiced with the movements.  It is a very comprehensive and amazing program as you see and hear your child imitating the sounds associated with the letters. 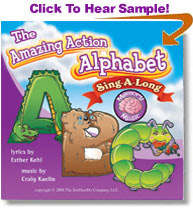 I love this teaching product because it covers teaching letters and sounds in a fun and engaging way.  As I read the stories with my 3 year old (who has picked up on the sounds like a snap), I can see my 1 year old trying out the sounds too.  The animal pictures are adorable, colorful and eye-catching.  I highly recommend the CD because you can also play it without showing the pictures.  My kids repeat the sounds along with it as I turn it on while they play.  I daily do several of these animal stories and sounds and I can see how easily my son is finding these sounds in the words that he speaks.  He'll say "Mommy, a says "a" in antelope like in A the Alligator is angry- a, a, a!"  Also, a really fun part of the CD is at the end of each story Esther says an encouraging word that start with the letter like "dynamite"  and my son always repeats the word!  I highly recommend this as a fun way to teach letters and sounds to young children.

Watch this interview with the creator, Esther:

*This product was provided to me free of charge for purpose of this review. This is my honest opinion of this book and no monetary compensation was received for my opinion.*
Posted by Shonda at 6:30 AM

Email ThisBlogThis!Share to TwitterShare to FacebookShare to Pinterest
Labels: Review