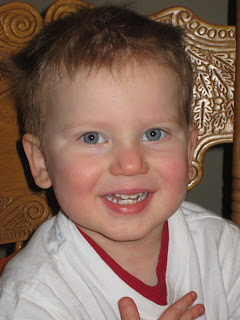 There is no other smile from a little boy that lights up my day!  Shrade is 2.5 today and what a lot of growing he has done this past 6 months.  He went from speaking a few words in a sentence to asking questions, responding to questions, making up silly sayings and singing all the time.  He also has a running dialogue of his life.  It has been so fun to see his language explode.

As you can see Shrade has a very funny sense of humor.  And everytime he "toots" in his diaper he thinks it's a FROG! 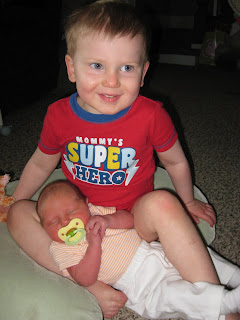 One BIG change that has happened just recently is that Shrade became a big brother to Jessna born on May 6.  We prepared him by reading stories about babies and I kept saying that baby was sleeping in mama's tummy.  We called the upcoming baby, Baby Surprise, and Shrade called it "Baby Prize."  He has really done well in stepping into the role as big brother.  He likes to throw away diapers and is very good at fetching things for mama when I'm nursing Jessna.  And he is really concerned that Jessna has her pacifier.  I thought he would react to her crying, but all he says is, "the baby cries."  He is really sweet with her. 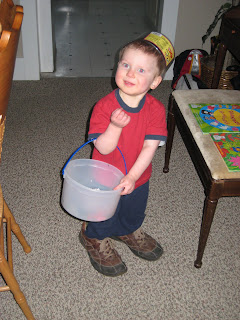 Here's my little man playing dress up.  Shrade just loves using ordinary things for play.  We have had so much fun doing our Brightly Beaming Resources lessons and I have taught him several Bible verses from Songs for Saplings.  Shrade can even sing his ABC's and counts up to 10 in English and Spanish. 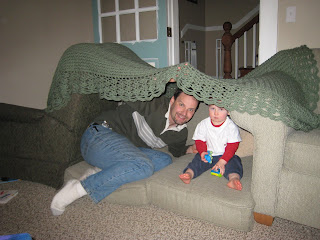 Daddy and Shrade have a blast making this "tent" quite often.  They also build with blocks and go on fun adventures in the garden and to the store.  The one really cool thing that we did recently was build an extra room in the attic and you can only get to it by going up a ladder.  You should have seen how quick he learned to climb the ladder. 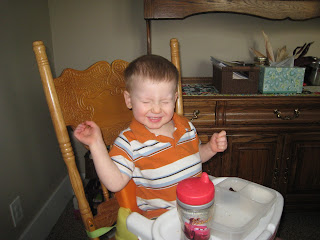 Oh, and this little guy has so many quirks.  He still likes to suck his food even though we tell him to chew and he certainly can.  Hoping this passes soon!  And Shrade is quite obsessed with cars and trains.  In fact, we have a train track right outside our house, but we actually have to go outside to the road to see it.  One weekend a really cool steam engine train came through and we ran out several times to look at it.  Now, all Shrade talks about is that train.  "The train go down the hill" or "Oh, I hear the train!"

We will be doing lots of neat things this summer and taking Jessna along.  Well, we will update you again when Shrade turns 3 in November!
Posted by Shonda at 2:28 PM