Season of a Lifetime (DVD Review) 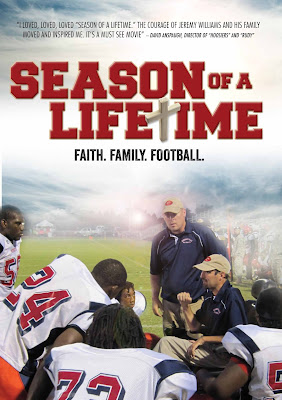 Season of a Lifetime is the documentary story of Jeremy Williams (you may have seen him on Extreme Home Makeover), a high school coach with Lou Gehrig's Disease who refused to give up and lived his life was with strength and faith.  Jeremy's rock solid faith in God gave him courage to face one of the most challenging and rewarding seasons of coaching as after being diagnosed spent one more year with the Greenville Patriots to head for the Georgia State Championship.

Not only that, Jeremy and his wife Jennifer have two children and their young son was born with spina bifida.  But the family is close with a full support of extended family and the community.  When people look at this family they see perseverance, joy and hope.  The mother and especially the daughter are the caregivers for their two men.  It's amazing to see the unity of this family in the face of impossible and adverse situations.  Jeremy told his wife, "You can cry one day" and then "We do what we do."

The testimony of the players at the end was incredible.  Jeremy was the father figure, the spiritual leader, and the ever faithful coach.  His devotion to the team was what brought him the satisfaction of whether they won or lost, they were winners because they played and did their job.  He coached through insurmountable odds and still kept the team together and brought them to the playoffs.  But mostly he impacted the young men that he came in contact with.  That is what he wanted to do!

What a fantastic testament of a modern day hero!  I encourage you to check out Jeremy Williams story and be inspired to impact a life today.

*I was given a complimentary copy of this DVD from Edify Media for the purpose of this review. All opinions are my own.*
Posted by Shonda at 2:25 PM