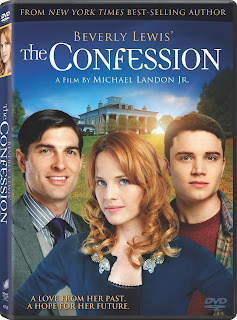 Katie Lapp, English born, but Amish raised has been reunited with her birth mother, or has she?  Katie Lapp desperately wants to connect with her birth mother and takes a journey to find her.  Before she arrives, the husband of her birth mother, Laura Bennett has some indiscretions to cover and hires an actor be "Katie Lapp."  Katie is very distraught and assumes the role of a hired maid to stay close to her mother.  Unbeknownst to her, her former love whom she thought had died is now seeking to find her.  Katie is torn between wanting to reveal herself to Laura and being asked to remain silent through promised threat.  There is love, mystery and the chance of true happiness waiting for Katie, but will she have courage to follow her heart?

I was a little disappointed that the some of the main actors from The Shunning were not in this film, but Katie Leclerc does a fantastic job of portraying Katie Lapp.  Her sweet face and charming ways drew me to her immediately. And all the actors give a great feeling of authenticity to their roles.  This movie was based on the book The Confession by Beverly Lewis and directed by Michael Landon Jr.   I honestly don't remember the book, but I remember the first movie and I think that it makes a good transition. This movie does leave an unresolved conclusion so I will be anxious to hear about a third movie to complete the set.

This releases on DVD on June 11.


I was given this DVD as a complimentary copy for Edify Media. All opinions are my own.
Posted by Shonda at 4:00 PM