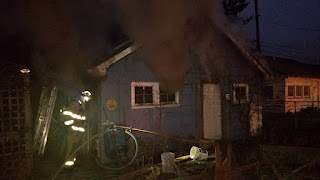 A little over 5 months ago we had a fire in our garage.  It was accidentally started by us.  But we didn't know about it until 2 hours later.  By then most everything near the fire was very burnt and melted. The heat was intense.  It even melted things on the opposite side of the attic.

The kids and I were inside the house about 20 feet away.  My husband had left for a dentist  appointment.  About 6 pm we walked out the back door.  I saw this smoke billowing out of the garage and bright orange flames through the far window.  My brain went numb.  My son yelled, "Mom, call 911!"  I froze.  I grabbed my phone and couldn't figure it out.  "I don't know how to call 911!!"  As I frantically was trying to sort how what had happened.  I vaguely remember my son telling me he was in the garage earlier when my husband was sharpening a chisel and some sparks fell on the sawdust.  He said they stamped them out, but apparently not all of them.  I know I shouldn't have done this, but the car was in the garage on the left side where you see the fireman.  I opened the door and more smoke came out.  I called my husband.  He was on his way home.  Then I kept yelling, "Where are firemen??"  The fire station is just a few blocks away. 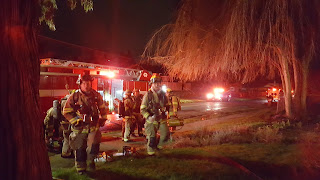 The firemen came.  We ran to the front yard and waited.  I was crying.   The kids kept asking questions.  My husband was calm.  We heard glass breaking and saws buzzing.  I couldn't imagine what was going on.  The firemen were so friendly and helpful.  One of them stood right next to us and kept the kids occupied.  My husband was able to get the car out before the firemen boarded up the place where the garage doors used to be. 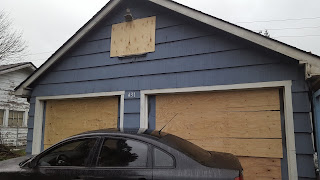 We had to park outside for months

From my vantage point I really had no idea what was going on.  They got the fire out pretty quick.  There were probably 20 firemen  and I saw at least 10 emergency vehicles on our street out front.  The garage is behind our house with an alley behind it.  Neighbors started pouring out of their houses and looky loos came by.  It all happened fast and slow.  We eventually went into the house.  I started crying.  The kids asked if we were still going to Awana. 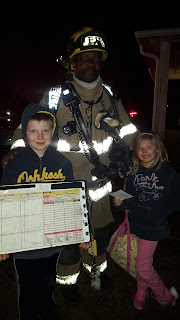 They were smiling, but they do that for pictures.

It was February 13, the day before Valentine's day.

We called the insurance company and started going through a process we were not prepared for.  Thankfully, we have very good insurance. 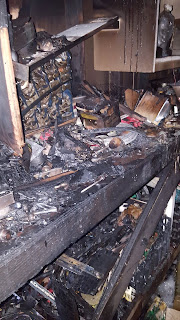 I went to bed in shock.  My husband stayed home the next day and we very carefully went into the garage and started scribing our content list.  It was beyond belief.  Everything was so charred and burnt, singed, broken, ugly, smelly, gross and gone!  If it wasn't burnt or melted it was drenched.  EVERYTHING!  We had a lot of stuff in there.  The attic held a lot of teaching things, a huge collection of National Geographic, things from my grandma (who passed away in October), lots and lots of pictures, books, things I wanted to pass down to my kids, camping, and recreation supplies, not to mention all my husband's tools (he's the handy man you call), his golf clubs, a freezer and so much more.  Thankfully our car was saved, but it had melted stuff all over it from the garage door opener.  But it was so smelly I couldn't drive it for a few days. 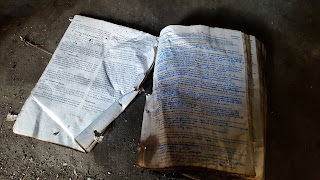 It was the worst Valentine's day ever...or was it?  My husband stayed home and we got to be together the whole day.  And I had made a meal that I was going to bring to church the night before along with a dessert.  We slept in and went through this grief together.  Not so bad after all. 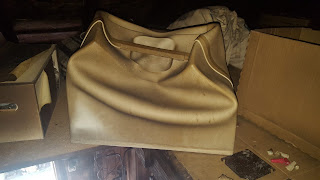 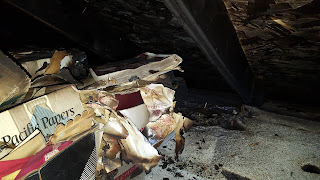 So now it's 5 months later.  We spent a LOT of time going through everything.  The garage frame was left standing and the attic floor was mostly in tact.  But we had to get rid of a LOT of stuff.  It was very hard.  I cried a lot.  But I just remembered it was stuff.  It's just stuff. 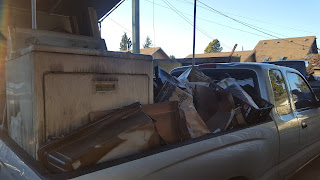 Load after load we took to the dump

Why oh why did this happen to us?  I asked this question and many others in the months after.  I couldn't function much.  Life was a blur.

We are still living through some hard things which I hope to share in Part 2.

Also, be sure to get the BOGO deal for Homemaker's Friend Daily Planner which lasts through the end of July.