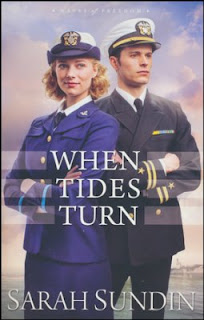 In Sarah Sundin's newest Waves of Freedom novel, When Tides Turn, Quintessa (Tess) Beaumont and Dan Avery battle with their hearts and purpose.  When Tess joins the WAVES program, Dan Avery is not convinced this pretty face could do the job of a serious Navy officer.  Tess and Dan grew up in the same town, but their interests and pursuits were very different and their ways of relating to others was opposite.  Yet, Tess was attracted to Dan's drive and ambition and despite her pretty looks she had her own passions and professional pursuits that she wanted to be noticed for and not her good looks.  Dan's vision of being a full time sailor kept getting derailed from his supervisors and he felt lost and uptight knowing he wasn't on the path he had his course set.  Both Tess and Dan were assigned to the same office in the Boston Navy Yard and they both become attracted to each other, but needed to refrain from anything beyond their official work since it was forbidden to date and/or marry another officer.  However, Tess becomes involved in a confusing mystery with her former roommate who is a French expat who meets together with other Resistance members in a small bakery in Boston.  Tess is sure there is a spy but is unable to discover any solid clues as she continued to share her reports to the FBI.  And her relationship with Dan is strained when he shares more of his heart to Tess before he leaves for his final tour.  Can Tess and Dan pull together to discover the spy and also unite their hearts?
This was another exciting and romantic World War II novel that Sarah Sundin has delivered once again!  I really enjoyed following the story of Tess who I "met" in the first novel in this series.  Her story was fascinating and intriguing.  She changed in so many ways and she chose to dig deep and discover what she really wanted to do in her life and in her heart.  The hidden romance of Tess and Dan was such fun to read and gave the story another element of suspense.  I recommend that you read the whole series since many of the characters are related and each story builds upon the other in some way.

﻿
*I was given a complimentary copy of this book by Revell Reads.  All opinions are my own.*
If you are interested in being a book reviewer, you can sign up HERE for the program through Revell Reads.
This is the 3rd book in the Waves of Freedom series.
You can see my reviews of the first two books below:
*Book 1 Through Waters Deep
* Book 2 Anchor in the Storm

Thanks for the lovely review, Shonda! I'm so glad you enjoyed Dan & Tess's story!