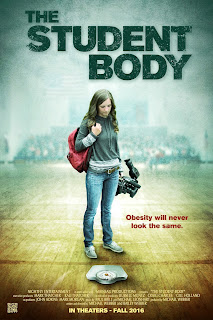 The Student Body is a documentary by Bailey Webber, a young journalist with a determination and voice for the youth in America.  Lawmakers decided to pass a mandate to force students to participate in school BMI testing.  Letters were then sent to kids enclosed in their report cards with the results.  Many of these letters indicated that children were obese and did not fall into the accepted range for body mass.  A young sixth grader in Ohio felt bullied and tore up her letter.  Bailey Webber stepped in to investigate and bravely undertook the controversial topic and pursued answers from government officials and other professionals.
Bailey Webber interviewed many experts and law makers to get their input on the unfair testing of BMI in the schools.  The kids being tested are feeling shamed, but the government insists that the tests are helpful to show which kids are at risk for obesity and other health issues.  Parents were confused and not sure how to handle this information.  They did feel that childhood obesity needs to be addressed, but maybe not in this way.  Bailey's research found that it was not helping the obesity problem, but creating a negative psychological effect on youth.
This documentary shared some great information and tackled a very sensitive issue in a very understanding way.  Bailey interviewed many people and after each interview she invited them to step on the scale for their own BMI testing.  About 95% of the time she was turned down.  She would laugh and say it was OK, but she knew that kids were not given that same choice in the schools.  One interview that was very intriguing was with Senator Kearney.  Bailey was unable to secure a live interview with him for over 7 months.  After many phone calls and unreturned emails, she finally went to his office and made an appointment.  In the interview Senator Kearney contradicted himself many times.  He too was asked to step on the scale and he was in for a surprise.
Bailey Webber did an excellent job on her first documentary film.  She gave an honest evaluation of the controversial debate and uncovered some interesting facts and reactions.
"Apparently, they are willing to speak for us, but not to us." -Bailey Webber

Available wherever movies are On-Demand.
*I was given a copy of this DVD for review.  All opinions are my own.*
Posted by Shonda at 3:09 PM