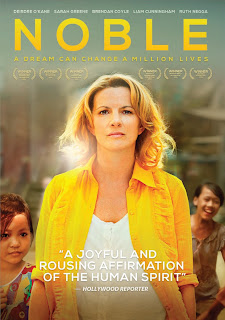 Christina Noble is a hero and rescuer to millions of lives.  She came from the slums of Ireland and chose to go to the slums of Ho Chi Minh City in Vietnam.  When Christina was a young girl, her mother died and all the kids in her family were sent off to different places.  She dreamed of becoming a singer and she never gave up on anything she put her mind and heart into.  In high school she was gang raped and had a son who was taken from her.  She married a smart, handsome man who broke her heart and abused her.  When she was in this dark place, she had a dream that she was to go to Vietnam and rescue the street children after watching a news piece on TV.

In 1989 she went to Vietnam under no agency, but of her own free will.  She started to connect with the street children and even though she didn't know the language she used her gift of song to bring them hope and life.  She joined forces with the native people who wanted to help these kids and with a lot of effort, determination, rejection and eventually support she was able to build a new building to take care of the many basic needs of the children.  In doing this she rescued many children from danger, hunger, and a host of other things young children should never have to endure.

Christina Noble was truly a noble woman who saved many generations of young people to help make a difference in one of the unreached areas of Asia.  She never looked back, never gave up and always  kept moving forward.  She just wanted to give kids their childhood.


This movie was incredible.  It was amazing to see the courage of this woman who worked tirelessly to make a difference in the lives of children that others did not think mattered.  But she knew that this mission was given to her by God and she took it seriously and with great determination.  I could not believe all that she went through in her own life and how God used her to make positive changes in her own life and in the lives of others.  Christina made it a point to connect with people and to make a difference.  There was a funny scene with a man who she told that by the time she moved out of the building that she would make him smile.  And she did!  This movie was riveting, inspirational and one not to be missed!


They broke everything but her spirit. They took everything but her dream. NOBLE, the award-winning feature film, is the incredible true story of a fearless Irish heroine driven by her daring vision to escape the slums of Ireland and risk everything on the streets of Vietnam.
Check out this website for more information: http://thenoblemovie.com/.

*I was given a complimentary copy of this movie for my review.  All opinions are my own.*
Posted by Shonda at 6:00 AM