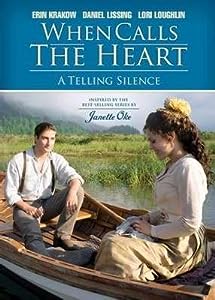 When Calls the Heart (A Telling Silence) has two stories combined in one movie.  The town of Coal Valley is still reeling from the mine explosion taking several men from the community and leaving devastated families.  Elizabeth Thatcher is a young teacher who left her affluent life to be where she belongs by helping these families move ahead and look toward a bright future.  She loves her students and is concerned for young Rosaleen who has not spoken since her father was killed.  One day Rosaleen goes missing and Elizabeth is desperate to find her.  She enlists Jack Thornton, the town constable and close friend to help her.  In the midst of this little girl's disappearance, Jack discovers that one of the widows has some whale oil in her shed which looked to be the cause of the church fire that occurred three months prior.  All of these events are swirling around with secrets being kept and Elizabeth and Jack sorting out their feelings for each other as well as for the friends that they are trying to protect.

It's another great family movie filled with mystery and hope for a small town.  Elizabeth has a heart of gold and makes everyone in her path feel loved and respected.  She is always ready to fight for her students and give up her comforts to sacrifice for those she has come to love in this small mining town rocked by tragedy.  It's fun to watch her interaction with her students, the parents, the townspeople and of course, Jack Thornton.

Please fill out the form in the link below to enter the giveaway for this movie.
Giveaway ends Saturday, June 7.  US only, thanks.


ENTRY for WHEN CALLS THE HEART DVD


*I was given a complimentary copy of this movie from Edify Media, Inc.  All opinions are my own.*


“A TERRIFIC SERIES FOR THE ENTIRE FAMILY”
-Dove Foundation
“absolutely beautiful and very entertaining”
-Movie Guide
When Calls The Heart
“A Telling Silence”
AVAILABLE NOW
From the Television Series inspired by the writings of Janette Oke
Nashville, Tennessee- When Calls the Heart “A Telling Silence” is produced and directed by Michael Landon Jr. and inspired by the best-selling books by Janette Oke.   A feature length film made from episodes of the When Calls the Heart television series, When Calls the Heart “A Telling Silence” tells the story of Elizabeth Thatcher (Erin Krakow), a young high society teacher fighting to make a difference in a prairie town in a part of the Western Frontier known as Coal Valley.   Almost immediately, she can tell that something is wrong.     The church was burned to the ground a month after a local mining accident and the only man left to investigate the crime is the Canadian Mountie, Jack Thornton (Daniel Lissing).  Meanwhile, the head of the mine is scheming to control the town, including the pastor who seems to be losing his faith along with his church.   The stakes are raised when a young girl goes missing and the town must come together to find her.  Distributed by Word Entertainment, When Calls the Heart “A Telling Silence” will be available to purchase in Christian Retail April 22nd, 2014.
Synopsis-  Feeling sorry for 8-year-old mute Rosaleen Sullivan, teacher Elizabeth Thatcher (Erin Krakow), reaches out to the little girl as they share lunch. But when Elizabeth is called away and then returns, Rosaleen is missing! Meanwhile, constable Jack Thornton (Daniel Lissing) discovers evidence that Cat Montgomery may have been involved in a suspicious church fire. Could the two cases be related?
Michael Landon Jr. – Director:  Michael Landon Jr., son of the late television legend Michael Landon, has been in the film business for over 25 years.  With two of the highest rated films in the history of the Hallmark channel, and several top ten releases targeted to the Christian market, Michael has become known for creating heartfelt, inspiring films that connect to the family.  He has developed and/or produced, directed, and written screenplays for Fox, CBS, NBC, Disney, Sony, Lifetime, and others.
Posted by Shonda at 8:22 PM